The CoE Russian Kondratjev, a women snatcher in Kosovo?

On 15th November, the Council of Europe will elect a rapporteur on Kosovo.

One of the candidates for the post is also a member of the Parliamentary Assembly of the European Council, Aleksey Kondrajtev.
According to desk’s information, and based on security institutions of the security of the Republic of Kosovo, the Russian candidate on reporting on Kosovo has been a part of the military intelligence service of Russia, known as GRU, within the Russian contingent of KFOR in Kosovo during the year 2001.

But, the candidate seems to be suspected of having been involved in a scandal, which had ended with the wounding of an Albanian citizen of Kosovo.
There are reasonable doubts that Aleksey Kondratyev, was involved in a scandalous case that had occurred on the early morning of 4th September 2001 in a night bar in the capital of Kosovo, Prishtina, being said that Kodratyev had initially tried to grab by violence a woman employee of this venue.

Following a long fight among the parties involved in the case, the scandal had ended with his wounding of another member of security of the venue, says one of the high-security officers from the security institutions of Kosovo.
In his biography, Aleksey says that he has been part of the military intelligence service of the Russian Federation, known as GRU and that during this time he has served as a member of the KFOR contingent. Also in his biography, it is said that he has been wounded in Kosovo, without mentioning the conditions in which it has occurred.

Immediately after the wounding, Kodratyev had been sent back to Russia where he had continued further studies in a military academy.
Local media in Kosovo, but also the international media had reported about the case of the wounding of a member of the Russian military of KFOR in the early morning of 4th September 2001, in Prishtina.

Whereas the daily Kosovo newspaper “Koha Ditore”, had reported while citing the UNMIK spokesperson Denis Norton that “At least one Russian soldier is in the hospital because of wounds. There are also at least four other citizens who had been wounded”. 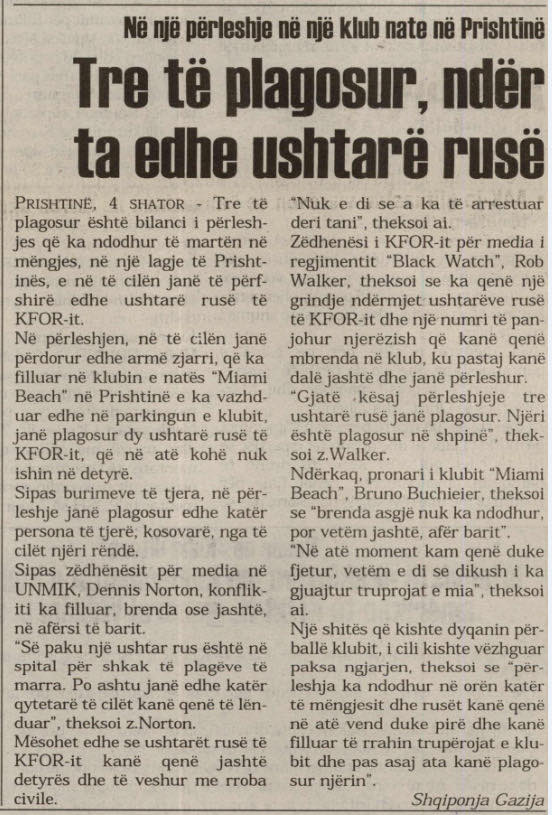 Other witnesses of this event, had said that “the fighting had occurred at 4 in the morning and that Russians who had been at the place drinking had started to drink and beat the club’s security and after that one of them had been wounded”.
A long judiciary procedure had taken place in Kosovo related to this case, which had ended only in the year 2019.

This is the main suspicion.

Secondly, the fact that Kondratyev had been sent back to continue his life in Russia immediately after being wounded because according to KFOR procedures, those involved in incidents did not continue to serve in the peacekeeping mission of KFOR.”
As the Kosovar media have reported during this week, Aleksey Kondratyev currently holds higher posts in the Russian Federation institutions, whereas one of his noted activities also was his meeting with the Syrian dictator Bashar Al-Assad.
RTK has reported several days ago regarding the unfriendly activity of Kondratyev towards Kosovo and Albanians. The video can be seen in the following link:

Borrell: Dialogue in Brussels is essential for Kosovo’s European road

Maas: Dialogue and comprehensive agreement have no alternative