Dear Prime Minister,
The Right Honourable Albin Kurti,
On behalf of the European Broadcasting Union and its community of Members, I am writing to ask for the proposed budget for RTK in your national 2020 draft budget to be reconsidered.
We understand that the Draft Law on Budget appropriations for the Republic of Kosovo for 2020 was approved at an extraordinary session of Parliament on 15 March 2020. According to Art.11 p. 10 “For the period January - December 2020, eight million nine hundred sixty thousand Euros (8,960,000) shall be allocated to Radio Television of Kosovo, under the expenditure category of subsidies and transfers.”
The suggested budget is approximately 2 million Euros less than the previous year, which will seriously undermine and jeopardize operations for Kosovo’s national public broadcaster, whose broad and important mission in society is to inform, educate and entertain citizens, promote national language, history, culture, and traditions and serve all segments of society, including children and minorities.
The role of public service media (PSM) to adhere to high professional standards and offer credible and trusted information is even more important in the current critical time of the Coronavirus outbreak, when citizens depend on reliable information, educational content and civil security announcements.
Independently of these exceptional circumstances, RTK is obliged by Law to broadcast significant cultural and sporting events, such as the Olympics and Euro 2020, which involves large-scale operations, long-term planning, and financial means.
Ensuring independent, stable and adequate funding of public service media is the subject of many European instruments, in particular, Recommendation 1878 (2009) of the Parliamentary Assembly of the Council of Europe on the funding of public service broadcasting requiring “adequate long-term funding” of PSM". 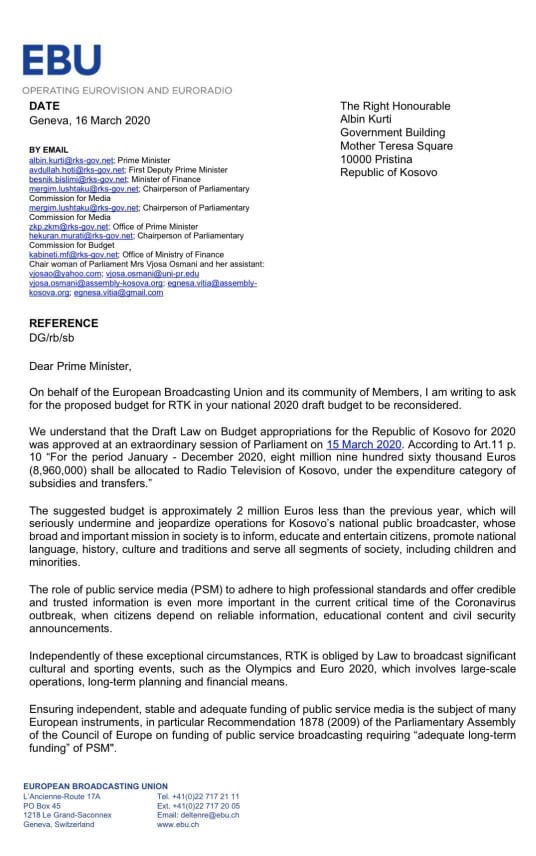 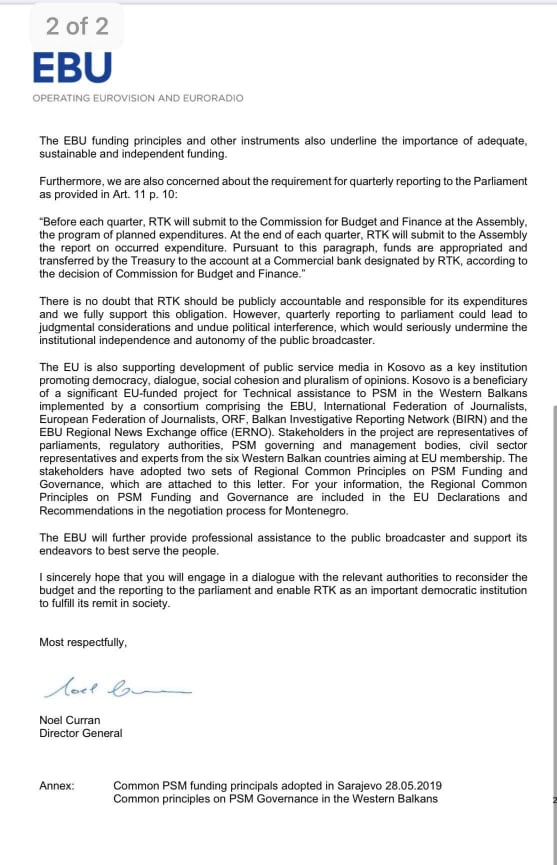 U.S Embassy: Remove the tariff, do not apply reciprocity measures

Vitia, Jevtic call for cooperation at a time of pandemic

6+ parliamentary group against new elections at a time of pandemic

Haradinaj: Impossible to hold elections at this time

Vitia, Jevtic call for cooperation at a time of pandemic

6+ parliamentary group against new elections at a time of pandemic

Haradinaj: Impossible to hold elections at this time

UK: Now is not the time for political maneuvering, but cooperation

Haziri: Tariff lifted without any coordination

Abazi claims he does not understand actions of LDK leadership

Thaci to continue with consultation of political parties today

WHO: Kosovo to take speedy measures, situation can worsen

The number of persons recovered from COVID-19 reaches ten

Kurti sends letter to Thaci, after their meeting