Thaçi sends third letter to Kurti, asks for the name of PM candidate

Kosovo President Hashim Thaci has written a third letter to the acting Prime Minister and leader of the Vetevendosje Movement (LVV) Albin Kurti saying that he is waiting for a reply to his request to the party to propose a new candidate for prime minister following the motion of no confidence against the government of Kosovo.

In the letter, Thaçi asks the incumbent Prime Minister of Kosovo Albin Kurti, a proposal for the nomination of the new candidate to be mandated for Prime Minister.

In the letter, Thaci informs Kurti that the required steps to form the new government will be taken in compliance with the Constitution of Kosovo, adding that the winning political party in the last elections has the right to propose a candidate for Prime Minister. 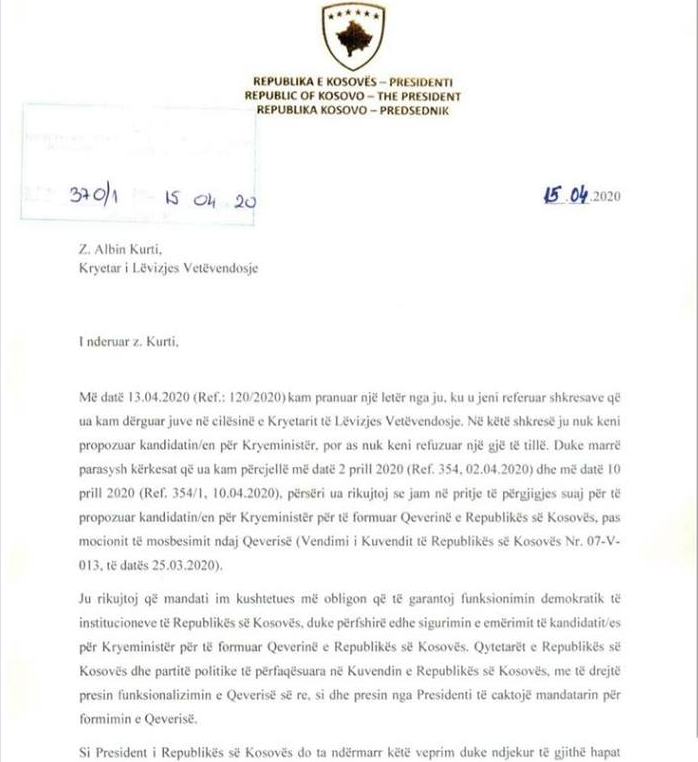 Kurti: Deals must be implemented in entirety, without exception

Kurti: Deals must be implemented in entirety, without exception

Howell: Kosovo should be accepted to the Council of Europe

Lajcak: We agreed to fully implement all dialogue agreements