Telegrafi online media runs an interview with Mentor Shala, scriptwriter and author of four-part documentary series “VIRUSSIA”. The project was implemented by Radio Television of Kosovo in partnership with other Balkan media as well as institutes that study the influence of Russia.

How did the idea to make the documentary "VIRUSSIA" come about?

Being journalists and following the developments in the country since the end of war, we have witnessed a continuous effort of Russia to extend its influence in Kosovo and throughout the Balkans.

The one should remember that the Russians were very active in the destructive sense during the war in Kosovo and the one should certainly remember when even without an agreement with NATO they ‘occupied’ Prishtina Airport a day before NATO troops deployed in Kosovo in June 1999. They have also been very active, again in the sense of "destructivity" during the talks on the status of Kosovo and have never ceased their efforts to hinder in any way possible the progress and development of Kosovo, but of the region too. Nonetheless, even after the declaration of independence, they have continuously worked to undermine democracy in Kosovo by not allowing local Serbs to integrate into the society of Kosovo, using Kosovo Serbs, at the same time, to achieve their goals.

Not only in Kosovo but also in the whole region, the Russians have done huge damage trying to hinder the Euro-Atlantic integration of the Western Balkan countries. Seeing these constant Russian movements in the region, the damage they caused to our democracies, we saw fit to make this series of documentaries, which was made with maximum dedication of the whole team and I believe that we have done a tremendous job. Because we believe we have shown in great detail the hybrid warfare methods that the Russians use to destroy Western democracies.

When we say hybrid warfare we mean the combined methods that one country uses against another country to make it dysfunctional.

The use of mass communication for propaganda is one of the key segments of hybrid warfare. The growth and empowerment of social media provides powerful propaganda and recruitment tools. Using fake news websites through fake profiles to spread fake stories is an essential element of hybrid warfare and one of the most dangerous. 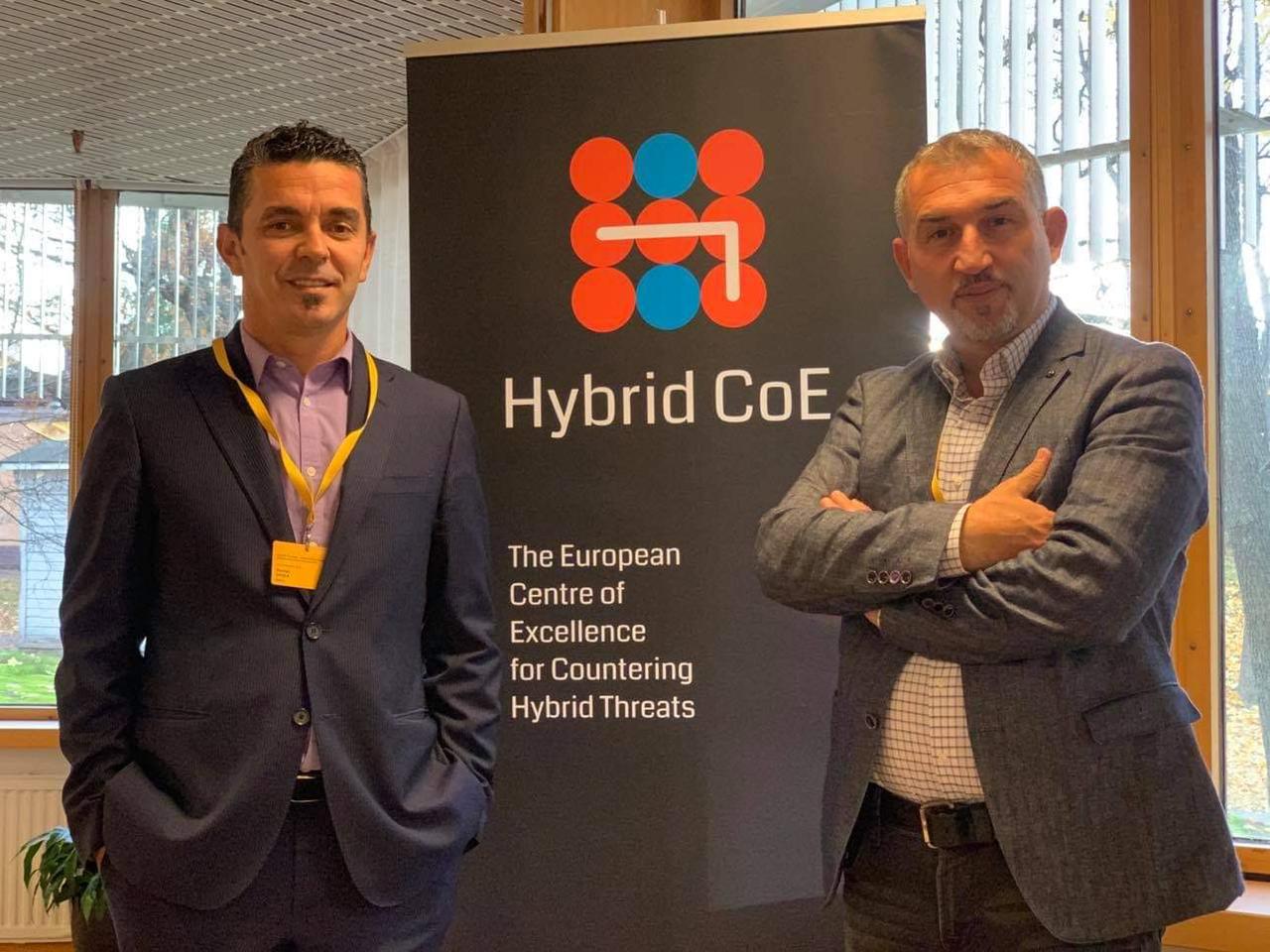 Has Russian influence in the Western Balkans really increased that much, to be worth making a four-part documentary?

The Russians have consistently sought to maintain influence in the Balkans, and it is true that in recent years there has been an intensification of their attacks in all segments. The reason why there are four parts of the documentary has to do with the areas in which the Russians operate. We have seen that they are very active in the field of security through the infiltration of their spies, mainly in the international institutions in the country (UNMIK).

We have presented actual cases of how Russian spies dressed under the guise of United Nations officials in Kosovo have carried out espionage operations that have caused a lot of damage in Kosovo but also in Montenegro and Macedonia. Further, we have presented actual cases of how they develop propaganda against a certain country to create the perception of a failed country and to increase the dissatisfaction of citizens with their country, which has happened in our country too. This was noticeable in Kosovo for years.

In the same manner it has been done in Albania, Macedonia, Montenegro and Bosnia and Herzegovina. You see how difficult it is for these countries to ensure internal stability, and Russian propaganda has played a key role in this, mainly through the online media, then their active role in diplomacy. You can see what role the Russian ambassadors play in the countries of the region in undermining the democracies of the Western Balkans.

We have also presented concrete cases of their activity to the detriment of the countries of the Western Balkans. Finally we have presented how Russia uses the Orthodox Church to achieve its goals. So there are these four segments: security, propaganda, diplomacy and the Orthodox Church, used by Russia, which interact with each other to destroy the systems of functioning of the states, in this case, the countries of the Western Balkans. Therefore, four parts of the documentary have been made - Russian hybrid warfare methods have been tackled in detail!

Was it difficult to persuade Serbs to talk about Russian influence in this project, given that there is indeed a fondness among the Orthodox?

It has certainly not been very easy. Not only due to the fact of fondness among the Orthodox, but also for reasons of their safety. Those Serbs who agreed to talk for the documentary were also aware of the danger they might face after the screening of the documentary.

There is a strict control of freedom of speech and thought in Serbia and not everyone dares to tell the reality, as their lives may be endangered, but also their families, by the security structures of Serbia, but also from those of Russia which operate within the institutions of Serbia. But, they are well acquainted with the issues we have addressed in the documentary and are well-known personalities in Serbia. In fact, they are brave and tired of the strict control of power and being constantly under surveillance by the Russian security services.

Are European Union countries aware of Russian influence? During the making of the documentary, have you seen their concern from a different perspective?

Yes, the EU is very aware of Russian influence! They are very concerned! Russia in various forms has penetrated in almost all EU countries. It has caused great trouble through the far right and the far left - oriented political subjects.

The top priority for the European Union, in coordination with NATO, is drafting a strategy to counter the Russian hybrid warfare. They have begun to develop mechanisms for responding to these combined Russian methods. But the main problem in the EU is that they do not have coherence in their actions, because in the EU institutions there are also extremist parties that support the policies of Vladimir Putin. And this, in turn, is causing headaches for EU countries in dealing with the Russian 'offensive' to destabilize Western democracies.

Kosovo’s citizens are very sensitive when it comes to Serbia's security structures. Why did you include one of the exponents of the Serbian secret services, Darko Trifunovic, in this documentary?

It was important for us to have personalities who are acquainted with the situation very closely. And yes, it is true that Trifunovic was part of the Serbian secret services. But, can you tell me, who better than him, in this case, is informed about the Russian infiltration in almost all institutions of Serbia. Trifunovic has been talking for several years about the danger of Russian influence in Serbia and the Balkan countries. He is also very critical of the government in Serbia for this very reason. The fact that he was a member of the security structures in Serbia only increases the credibility of the stances he says about Russian influence, because he has been at the heart of secret information in Serbia.

After the first two parts have been broadcast, what are the reactions of the public opinion regarding the documentary, especially in Kosovo?

The documentary has really been realized with great dedication. We worked for two years for its realization. The reactions are fantastic throughout the Balkan region, and not only! Friends from EU countries and beyond have written to me congratulating us on the documentary. Of course, the Russian reaction was also immediate! You have seen the reaction of the Russian ambassador to Serbia, how nervously he speaks when asked about the documentary! The effect of the documentary has been immediate and will increase day by day, for that I am very sure.

Can the Kosovar reader and viewer expect another documentary series of this kind?

For the time being we are concentrating on the dissemination and distribution of "VIRUSSIA" documentary series. But, of course, we are also discussing some very interesting ideas for the Balkan region and beyond. I believe that soon we will materialize some of the ideas we have.

The third and fourth part of the documentary will be broadcast very soon. Can you tell us briefly the content of these parts?

The third part of "VIRUSSIA" tackles the methods that Russia uses through diplomacy to achieve its destructive goals in the Balkan region. We focused with particular emphasis on the obstacles that Russia is putting to the Kosovo-Serbia dialogue as one of the crucial issues for the stability of the Western Balkans. Of course, we have also dealt with Russian 'diplomatic' activities in Macedonia, Montenegro, Bosnia and Herzegovina, Albania, etc. We have offered the public concrete cases of how Russian "diplomats" act to destabilize the countries of the Western Balkans.

In the fourth part, we address the role of the Serbian and Russian Orthodox Church in this hybrid warfare that Russia has been waging for a long time in the Western Balkans but also in the EU countries and beyond. In this part, the public has the opportunity to understand the great role of the church in drafting Russian strategies and policies, as well as the extent of its influence on Orthodox believers in the Balkans, especially among Serbs.

We have tried to show with what role Patriarch Amfilohije was tasked from Russia in keeping the countries of the Western Balkans destabilized. At the time we were making the documentary, Amfilohije was still alive, but during the pandemic he died and it was very unfortunate that he could not see the documentary. I would have wanted him to see the documentary as well, to see how much damage he has caused to the countries of the Western Balkans that will take many more years to repair.

"We’ll remove measures on license plates, if Serbia does the same"

"We’ll remove measures on license plates, if Serbia does the same"

“Only Kosovo Police members involved in operation in the north”